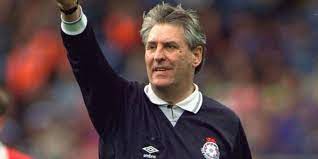 Speaking exclusively to Football Insider, the ex-Fifa and Premier League referee suggested players should only be banned if they are shown three yellow cards in qualifying.

Robertson is one of eight Scotland players to have been shown two yellows in their first nine group games and if any of them are cautioned against Denmark tonight they will miss the country’s first World Cup playoff since 1986.

As quoted by the Not The Old Firm (November 13), Steve Clarke claimed it is “unfair” groups of different sizes have the same suspension thresholds.

“Personally, I think if the competition goes to the playoffs, as it is doing, yellow cards that have been collected in the group games should be not counted going forward,” Hackett told Football Insider correspondent Connor Whitley.

“Uefa and Fifa have always had this tendency to put value in the yellow card by the very nature of the suspension.

“It’s a tough call. They want teams and players to be on their best behaviour and it does have a deterrent effect.

“Steve Clarke has a point, I support his view. Eight games against 10 and in the playoff scenario you are exposed more to the impact of the yellow cards in the competition than other teams which is inherently unfair.

“I just wonder if that two yellows and then you’re suspended could in fact be three. I would reduce the punishment to three yellow cards.

“It will always be unbalanced in this situation.”

In other news, Liverpool could sign an 18-year-old ‘better than Jadon Sancho’ after a director reveal.