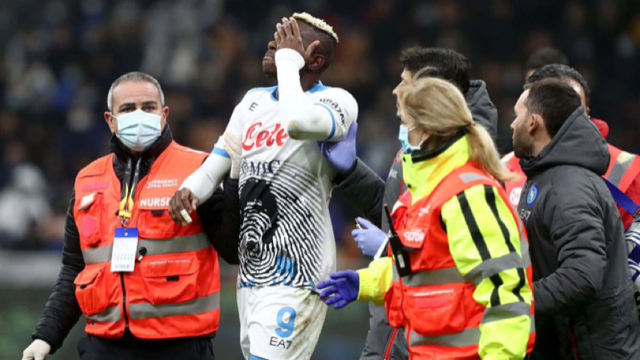 Victor Osimhen will now be fighting to be fully fit for the AFCON as he will be out for at least four weeks after he fractured the eye socket and cheekbone at the weekend.

Osimhen is feared to have fractured his cheekbone after a collision of heads in today’s Serie A clash between Napoli and champions Inter Milan.

Osimhen was forced out in the 55th minute on account of the injury which left his face badly swollen as league leaders Napoli suffered their first loss of the season tonight.

The extent of this latest injury setback will be determined later this week.

read also: Woman reportedly stabs husband to death after he allegedly caught her with another man on their matrimonial bed in Edo

The striker’s all-action style means he is prone to injuries.

Last season, he was sidelined for several months after he suffered a shoulder injury on Super Eagles duty against Sierra Leone in Benin City.

He has also been hospitalised in France after he blacked out after another physical challenge in Ligue 1 during his time with Lille.

Napoli have announced the injury diagnosis and he will now undergo surgery.